Christopher O’Mara says that growing up in Haliburton, there wasn’t a day for him between Grades 6 and 12 in which he wasn’t called a homophobic slur.

“When I returned to Haliburton in 2013, I began to face the same sort of adversity in the community,” he said. “Openly gay at this point and living with my partner this had a deep effect on how I interacted with the community because I felt unwelcome and unsafe. When one gets called homophobic slurs while grocery shopping it makes it hard to feel safe in their community.”

In 2016, the window of his pet grooming salon was spray painted with a slur, and three months later, his business door was, as well. In March 2020 he received a signed letter from a community member stating she was deeply offended by the Pride flags he has flown since Minden Pride 2019 – an event that celebrates the LGBTQ community and notes the need for such events in part because of the harassment O’Mara still faces today.

“She accused me of endangering the youth of our community, quoted scripture to describe my ‘sin’ and carried on about how upsetting it is for her to see them every time she drives by,” he said of the letter.
On Sept. 6 at around 11 p.m., O’Mara was again the target of what he is calling a hate crime.

Two Pride flags hanging in front of his home and business were damaged and stolen, with the perpetrators leaving the Canadian flags flying next to them alone. Surveillance video shows two people approaching the flags on the sidewalk, while one person works on taking the flags down, the other appears to keep surveillance on the street before helping. With the flags down, they run back down the sidewalk in the direction they came. O’Mara shared the surveillance footage – in place because of the previous events – with police and on social media.

“While I don’t know whether this was hate motivated, it is hard to think otherwise as they didn’t touch any other flags we were flying,” said O’Mara. “Once again, I find myself feeling shaken and questioning whether or not it is worth it to be a vocal queer advocate in our community. While I believe that my role as a queer business owner is an important one to show our youth that you can be different and still exist in small town Ontario, these incidents make it difficult to want to carry this particular torch.”

O’Mara is owner and groomer at Prettypaws Pet Boutique and Spa on Highland Street in Haliburton, where he also lives with his partner, Adam Perecko.

“I have had enough,” he wrote on social media. “I am sick of being bullied in my home.”

This time he is offering a $250 cash reward for information that leads police to charge the individuals involved in damaging and stealing his pride flags, which has been raised to $1,000 due to pledges from community members and friends. 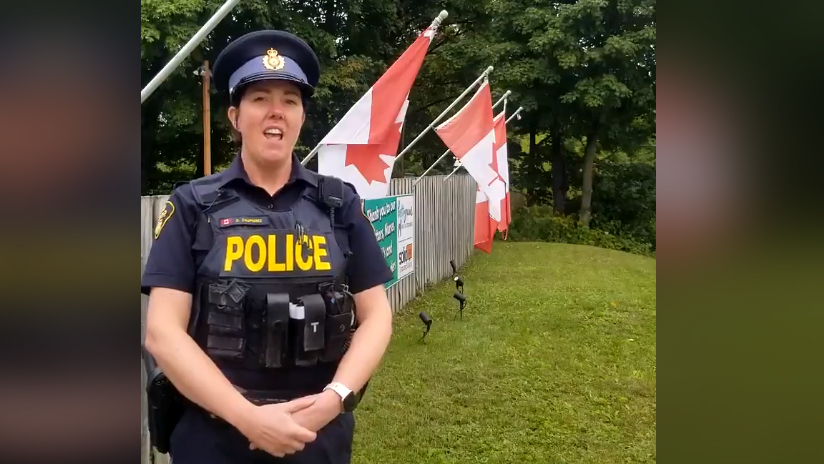 “[The reward] is being offered to show how seriously we take this kind of hatefulness in our community,” said O’Mara. “We deserve better than to suffer these indignities and if the offenders can be caught and charged it may make others think twice before vandalizing other businesses.”

Support for O’Mara, as well as embarrassment and shame from fellow local residents about the targeted vandalism, was expressed on the post on his Facebook page, which was shared more than 300 times.

“Supportive voices for equality and kindness need to be loud,” read one comment. “People who find it difficult to love everyone are entitled to their opinion but they are not entitled to be mean and hateful. There is enough hurt in this world. Shame on them.”

“Wow. I’m soooo sorry homophobes are still in our community and feel somehow ‘OK’ with totally unacceptable and hateful behaviour,” read another comment. “This makes me so mad on the one hand, but overwhelmingly sad on the other. Know that you have our support … We will speak out.”

O’Mara said he has been “extremely touched by the outpouring of support this time, and all the times before, by our community, friends and family.”
Haliburton Highlands OPP said they are investigating a mischief and theft incident in relation to the Pride flags being stolen from the business, and said that any information in relation to the identification of the individuals seen in the video O’Mara posted to Facebook would be appreciated. They noted they cannot comment on the incident as being a hate crime, as it is still under investigation.

“…Hate is not in the fabric of the Highlands,” said O’Mara. “It is the result of a handful of small-minded individuals,” he said. “Haliburton and Minden are loving and inclusive communities full of supportive allies and advocates. We will not be silenced to go into hiding because of hate. It only makes us more galvanized to set an example of being out and proud for our community’s youth.”

Highlander of the Year awarded…

The elephant in the County

EH! to address wetlands and…