The Mississauga resident was an 11-year-old camper when he attended Camp Towhee spending six weeks at the residential camp for children which changed thousands of lives.

The Child Development Institute-operated facility is a few kilometres outside Haliburton off of Highway 118. The camp celebrated its 50th anniversary with an open house event including opportunities to reminisce a barbecue and activities on Saturday June 16.

Since its inception in 1968 Towhee has been improving the mental health of children and youth with learning disabilities; empowering them giving them independence and a sense of belonging through group exercises and specialized programming according to information provided by the Child Development Institute.

The camp helped participants learn to cope with stress with adventures such as canoe trips and art-based learning all set against the rugged natural surroundings.

Short appreciated the opportunity to return to the place he felt accepted and said “It’s like going into a time capsule.”

He remembers how he always wore pants throughout the entire stay and the strong rapport he had with the cook named Yummy and his counsellor Shelley and how a cabin mate played Beatles’ 45 records on his portable record player.

The beautiful surroundings were also the backdrop to a newly confident Joe Short.

Towhee has a special place in his heart and for 10 years he donated what he could from his work as a labourer to ensure other children like him could get away be accepted for who they were and find themselves.

For 15 years Nicola Bangham the camp’s program manager has seen a lot of growth in the campers the staff and herself.

Camp Towhee helps campers cope with anxiety enabling them to go to school and establish and maintain friendships.

“We talk a lot about this place being a place of belonging and that the belonging piece is the most powerful thing we offer” she said. “A lot of the kids can’t identify a friend when they first come to Towhee and then they walk away [with deep friendships] … there are kids here who met in 1989 and they are still best friends.”

Today the additional challenges of a modern world are resolved with the remote nature of the Highlands. Many of the campers face the challenge of disconnecting from technology whether it’s mobile phones or video games. When they get to the camp they’re quitting cold turkey.

After two or three days the youth stop showing addiction symptoms such as moodiness and shortness with others Bangham said.

“You can see they look up and see how beautiful [the area is] and for us what a great skill [that is to learn]: how to be in your world without a device because for a lot of our kids it’s easier to interact in that way” she said.

Bangham has taken great pride and satisfaction from her time at the camp. There has been an evolution for her like the campers she has seen come and go.

“I’ve developed a tremendous amount of empathy for people having anxiety and mental health challenges … it’s helped me become a better therapist. Really working in this environment I’ve made friends for life here. It’s just been incredibly inspiring. A lot of our kids have really had profound struggles and you see them transforming in two weeks” she said.

She said the 50th anniversary is a significant milestone for the camp that she characterizes as a children’s mental health treatment centre disguised as a camp.

“It’s an honouring of how special and magical this place is” she said.

The power of this camp is evident in how it changed the course of Paul McDonaugh’s life.

A past staff and volunteer member from 2000 to 2004 he came to the anniversary celebration with his son and wife. He and his wife met at the camp when they were both staff members.

Circumstance brought the avid outdoorsman to seek employment at the camp.

He was laid off from his architectural technologist job where he worked on waterslides and buildings. He applied to the camp at the behest of his friend who had worked at the camp and knew McDonaugh wanted teaching-related experience for a possible career change.

After volunteering for one three-week session he was hired on for the subsequent session in 2000. The following summer he applied to teacher’s college in Ottawa and after finishing became a teacher. He currently teaches construction and engineering at a high school in Ottawa.

At the anniversary event he was touched by how one former camper remembered him.

The camper came up showing the reflective vest McDonaugh gave him to help with directing traffic during a parent visit more than a decade before. That camper now coincidentally works in construction wearing such vests to earn his living. McDonaugh said that person’s confidence grew during his time at camp particularly during canoe trips.

The high school teacher has even returned to the camp to volunteer as a counsellor and brought his students to build two buildings and other structures on-site.

McDonaugh loves the area and has looked into getting a high school teaching job within an hour of Haliburton. If that doesn’t work out he’s been thinking of retiring to the Highlands and possibly volunteer at the camp again during retirement.

Lounging at the dock under a strong warm June sun former camper Conrad Fleet 36 came up from London for the weekend.

“When you’re here you could be yourself instead of dealing with all the peer pressure back at home with school life where you have to be expected to act a certain way. Here you could relax and let yourself go” he remembered.

He spent the summers of 1993 and 1994 at Camp Towhee and said the staff and campers were like extended family. One of those campers from 1994 continues to be a friend of his more than 20 years later. Tasha Taylor was 11 years old when she came to camp and met Fleet.

The two got along well and spent a lot of time together.

Her mother Linda made the trip from her home north of Toronto and was sitting across from Fleet. She called herself Fleet’s “surrogate mother.” There is always a place for Fleet at her home. Once a year like clockwork he stays with Linda. It’s part of his vacation spent at Toronto Comicon the comic book convention.

Linda said Fleet looked out for her daughter.

“Conrad took over and protected her. That was his feeling. He was Tasha’s protector” she said.

She said her daughter was a much happier child as a result of the positive re-enforcement she received at the camp. It was stark contrast to the bullying and the out-of-place feeling she received before. She could even help others using what she learned while at Camp Towhee. She said Tasha was like a “mini-adult” and helped other children who experienced challenges.

Taylor said there was a residual benefit to Tasha’s younger sister who came for a day and noticed a difference in her sibling in that setting realizing compromise was integral.

Fleet said what set this experience apart for him was how the counsellors treated each camper with respect despite each of their unique challenges.

Without the experience he believes he would have gotten into trouble more at school.

He hopes for the sake of other children with special needs that Camp Towhee will continue for another 50 years.

The Christmas season is upon…

Taking a shot at life…

Tens of thousands of titles…

Bonnie Roe to be presented… 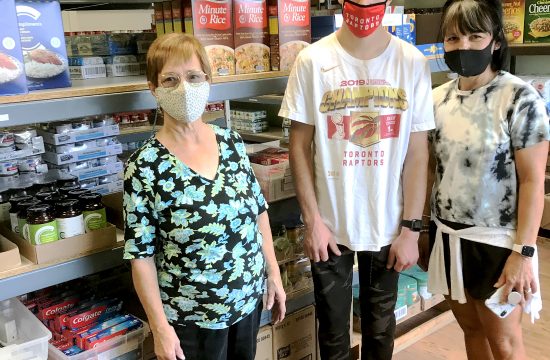